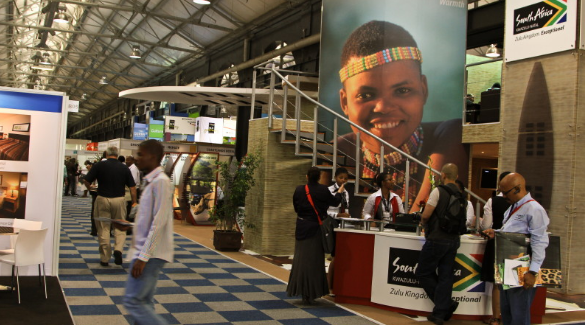 Durban — It was a fusion of originality and creativity complemented by global marketing skills from across the world to showcase their tourism attractions or destinations at the just ended Indaba 2016, Africa’s largest tourism trade show.

Find sales opportunities in your market

The top African trade show – which was held from May 7 to 9 – at the Inkosi Albert Luthuli Convention Centre (Durban ICC), exploded with originality and creativity of the Africa’s wealth of cultural appeal, tourism natural attractions, services and products.

In the media talk facilitated by the CNN New York based news anchor Richard Quest, African tourism ministers acknowledged the need to consult and engage one another to work on the bulk of issues which hinder tourism penetration.

African ministers led by Hanekom added a strong voice on how Africa countries can come together to position themselves as tourism business collaborators and promote inbound tourism in which huge opportunities have largely not been exploited.

“If one quarter of African countries were to implement the open skies for Africa decision and facilitate great air connectivity between our countries – additional jobs (job creation) and an added GDP that could be generated with obvious numerous benefits for tourism in many countries, said Derek Hanekom, South African’s tourism minister.

Hanekom said that many major airlines fly to Africa from North America, Europe, Asia and other parts of the world. However, once visitors reach this continent they encounter difficulties in connectivity as well as exorbitant air fares from country to country. He said that air transport services in Africa remained a critical constraint.

Hanekom, who was one of the three panelist’ tourism experts who attended the media talk including ministers from Zambia, Zimbabwe, Namibia, Lesotho, Seychelles, Swaziland, Burkina Faso and Ghana. “Africa’s is a continent of unparalleled opportunity, and tourism is where the greatest untapped opportunity lies”, he said..

In addition, the minister said: “Africa is a vibrant melting pot for tourism: the diverse cultures, customs and traditions of our people, merged with the endless variety of our landscapes, blended with unique biodiversity, tempered by our historical legacy, and fired by the spirit of freedom and equality”.

The opening of the Indaba 2016 was addressed by minister Derek Hanekom , the Mayor of Durban, Mr James Nxumalo, and the MEC for KwaZulu-Natal Department of Economic Development, Tourism and Environmental Affairs, Mr Michael Mabuyakhulu.

The South African government, according to the minister, has earmarked the sector as a growth industry of national priority because of its potential to bring about economic growth and create employment.

During his opening address the Minister stated that by standing together the public and private sectors in the industry would be stronger and able to contribute to the upliftment of the nation. He spoke about INDABA and how it has evolved into Africa’s largest and most successful tourism trade show that creates a platform to showcase the best of the African tourism products and services.

However, he noted that if we are to be successful, everyone needs to pay more attention to the image and reputation of Africa. “Not only through effective marketing, but by putting on a really great show when tourists arrive. Their word of mouth will do our marketing for us and using social media begins the minute they arrive on our shores.”

The Minister adds that the Indaba provides the ideal platform for African countries to work together. “A successful Indaba contributes to the success of tourism in all our countries.”

Tourism is a key contributor to our economy as well as job creation, says MEC Mabuyakhulu .It is critical for the African continent to develop policies that are integrated to reflect positively on what the continent can offer together. Diverse products that define Africa should be tailor made to suit tourists to visit many African countries and not just one. Intra African trade needs to be a key focus in this regard”.

He added that one of the City’s key focuses, in line with Indaba, is on SMMEs and therefore it has put in place various initiatives around these enterprises.

INDABA hosted nearly 14,000 business meetings, about 1050 exhibitors, 1856 buyers and 724 media. Owned by South African Tourism, INDABA is one of the largest tourism marketing events on the African calendar and showcases the widest variety of Africa’s best tourism products and services. The event attracts quality buyers from across South Africa, the African continent and the world.

Learn more and network with the best
Earn valuable CPD credits
Redeem your 50% discount
How to use product life cycle analysis to your advantage. (David Baggs)
Source: allafrica

This year, Solid Green has attained the double milestone of its tenth birthday and one hundred green building certifications! This…

Exploring the benefits of South Africa’s vast coastline for the country, and the enjoyment it holds for tourists, are among…

Seven Integrated Wildlife Zones are being introduced across South Africa to protect the country’s rhino.