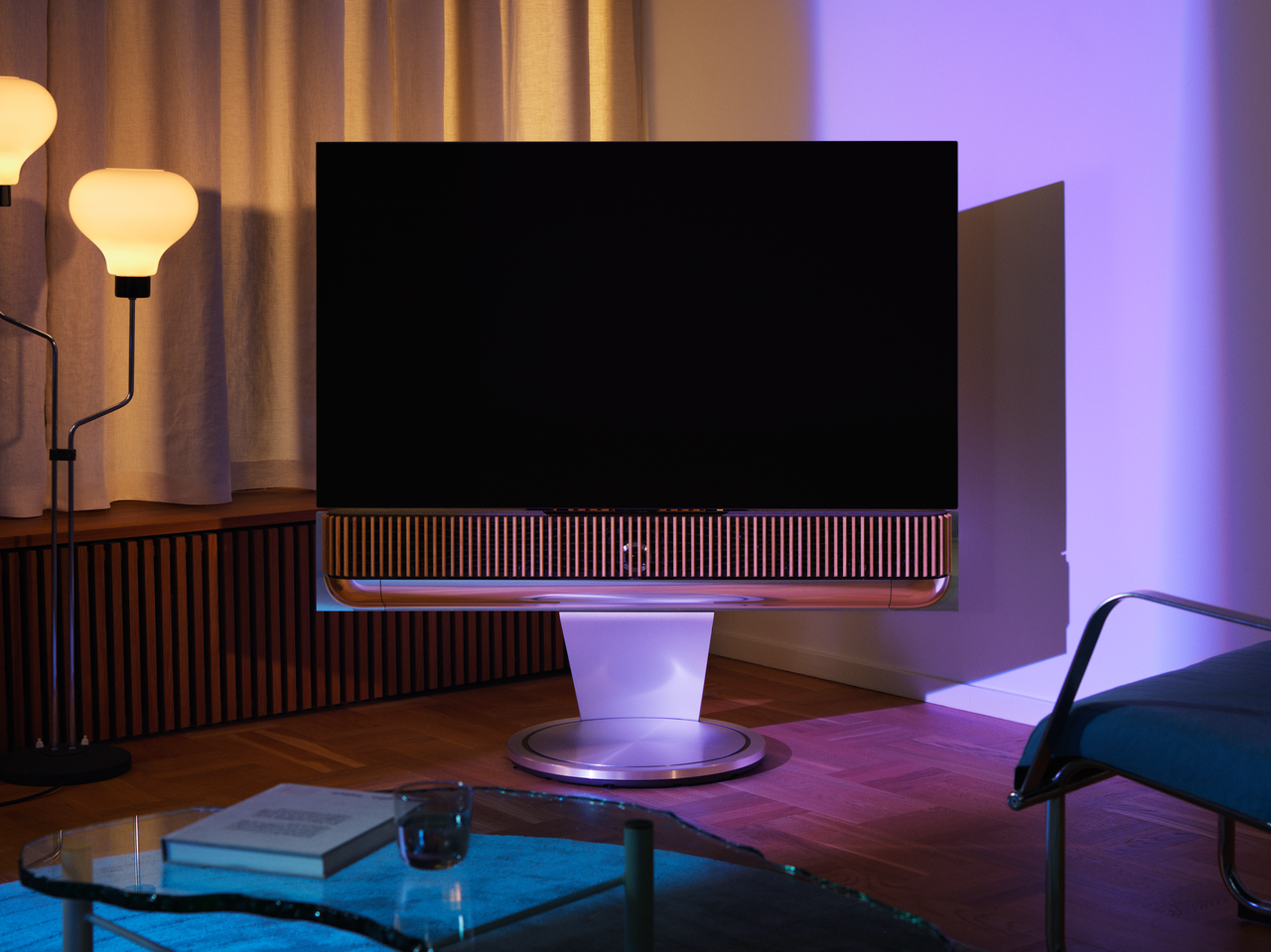 Crafted with the ambition to be the world’s most powerful and immersive soundbar, Danish audio brand Bang & Olufsen today announced Beosound Theatre: an innovative and meticulously crafted high-end soundbar that delivers the power of a multi-product home cinema, all in one singular product.

“Beosound Theatre completely redefines cinematic sound in the home. With its powerful sound, advanced technology platform and modular design, we bring the immersion of a multi-speaker setup into one soundbar that slots seamlessly with any screen”, said Kristian Teär CEO of Bang & Olufsen and continued:

“With Beosound Theatre we unleash the full potential of the high-quality streaming services now available to customers and bring the magic of the cinematic experience into the home. At the same time, it is built to last for decades due to its modular design, which allows you to update, rather than  replace, this beautiful soundbar”.

AN ENTIRE CINEMA IN ONE BEAUTIFUL SOUNDBAR

To create the powerful and immersive cinematic experience, Beosound

Theatre comes with 12 speaker drivers, including two custom-made long stroke 6.5” woofers and 800 watts of amplification power, providing up to 112dB sound pressure level. Speech clarity is managed by the custom-made center channel, where the tweeter is mounted directly in front of the midrange. The alignment of these drivers ensures a better sound distribution elevating the quality audio experience for everyone in the room, while directivity has been designed to optimize speech quality.

Building on the Beam Width and Beam Direction Control developed for Bang & Olufsen’s flagship Beolab 90 speakers, Beosound Theatre introduces a new three-dimensional sound directivity due to the patent- pending combination of the direct, side- and up-firing speakers. This means that all loudspeaker drivers are working together not only to produce sound, but to control its beam width and direction.

“We originally developed the Beam Width and Beam Directivity Control for Beolab 90 to reduce the effect of sidewall reflections at the listening position. Basically, to make the walls disappear. In Beosound Theatre, we are using the technology to direct sound away from the listener, which increases the perception of spaciousness and gives a much more immersive experience”, said Senior Technology Specialist Jakob Dyreby.

A BANG & OLUFSEN TV EXPERIENCE DESIGNED FOR ALMOST ANY SCREEN

Bang & Olufsen is renowned for its unique approach to craftsmanship and design. Based on the principles of modularity, customers can easily transform the soundbar into a complete wall-mounted or floor standing Bang & Olufsen TV experience, so it blends in perfectly and doesn’t take up more space than their existing TV1.

The modular design thinking also applies to the TV screens and the cover of the soundbar, which are both replaceable. The aluminum “wings” are also extendable for customers whose TV screens grow as they upgrade, proving that Beosound Theatre continues to provide perfectly integrated  solutions for greater longevity2.

“We know that our customers want to invest in products that last, which is why Beosound Theatre has been modularly designed to outlast many TVs in its lifetime. We have made a solution that enables you to update your product rather than replace it, and a product that can evolve with you overtime”, said Head of Product Circularity, Mads Kogsgaard Hansen. He continued:

“The Beosound Theatre interface bracket provides the possibility to dock almost any screen to the soundbar. This means that people don’t have to invest in a new TV or can simply choose what they believe is the best TV solution.”

The interface bracket is motorized and forms a seamless connection between the stand and the TV screen. Cleverly hiding any clutter to present the TV as one integrated design, the bracket includes a compartment to fit smart TV boxes and to excess cables from view.

FROM SOUNDBAR TO SOUND CENTRE

Although Beosound Theatre is a powerful one-product solution, it can evolve to be used as a dedicated sound center, providing new opportunities to build your home cinema. Starting with seven built-in outputs and supporting up to 16 external loudspeakers it can be the heart of a full-blown Dolby Atmos 7.1.4 surround configuration. In this setup, Beosound Theatre functions as a center speaker that merges the Dolby Atmos decoding and custom-tuned post-processing with Bang & Olufsen’s Proprietary True Image algorithm to maximize the capabilities of all Bang & Olufsen loudspeakers.

In addition, Beosound Theatre comes with a new bass management system that’s unlike anything else. Where other systems simply send the bass to the most powerful loudspeaker – usually the subwoofer – Beosound Theatre uses all Bang & Olufsen loudspeakers in the system to work together as a single unit. This not only gives you the maximum potential of the entire system, but also helps to control the resonance in your listening room, making sure that the various loudspeakers work with and not against each other.

“You can buy Beosound Theatre as a soundbar and later add a pair of rear loudspeakers such as Beolab 28 in a triangular setup that delivers an incredible spatial sound performance, while continuing the overarching aim of minimal products, mess, and compromise in your space. All you need to do is connect them. That flexibility also means that our customers are not  limited by their initial purchase decision, which in turn helps us extend the  lifetime of Beosound Theatre and increase the likelihood of multiple ownerships,” said Senior Technology Specialist Jakob Dyreby.

INSPIRED BY THE GRACE OF SAILBOATS

Beosound Theatre continues the design philosophy of Bang & Olufsen’s much loved products, such as Beolab 8000, Beolab 18 and Beolab 28, which focused on making a heavy volume appear to balance on a pinpoint.

Designed to reflect the effortless grace of sailboats, Beosound Theatre’s keel-like design makes it appear as if it is resting on an aluminium blade, floating in the air as one fluid form.

This illusion was artfully created through the aluminium expertise at Bang & Olufsen’s Factory 5 in Struer, Denmark. The middle-extruded profile of the aluminum was polished and anodized with two end caps that were formed into a curved shape and split into four end caps. This enables the curved edge of the product to seamlessly fit the flat profile of the soundbar, creating one unified piece.

The solid oak lamella cover is made by a family-run factory in Denmark and perfectly matches Bang & Olufsen’s family of Beolab speakers, such as the Beolab 18, Beolab 28 and Beolab 50. The design of the lamellas that clip into place rather than glued means that they can be easily disassembled or replaced, while the fabric version is designed to be a visually softer solution that will easily blend into any interior setting.

Beosound Theatre comes with Bang & Olufsen’s new setup technology called Roomsense. By placing the external microphone at the listening position, Beosound Theatre will work with the Bang & Olufsen App to measure the distance from the listener to the soundbar. But more than this, it will also assign a role for each speaker based on the different placements, carry out sound compensation for each speaker if it placed free standing, up against a wall or in a corner, as well as overall room compensation to avoid unwanted resonance.

“With Roomsense, everyone can make the perfect setup in a matter of seconds. But just as important, it allows for all kinds of placements of the speakers, so people can decorate their homes as they want – not based on the standard speaker placement”, said Jakob Dyreby.

NEXT GENERATION LISTENING – FOR GENERATIONS TO COME

Not only does Beosound Theatre honour Bang & Olufsen’s legacy products with its timeless design language, the soundbar also comes with Bang & Olufsen’s own proprietary software platform called “Mozart”, which continues the heritage of ensuring that the soundbar can connect seamlessly with products as far back as 1986, creating a cross- generational home audio setup.

“Products such as the Beolab 6000 and Beolab 8000 column speakers are loved by people who appreciate design worldwide and we have made sure that they can use them with Beosound Theatre right out of the box. All you need to do is connect them”, said Chief Design Officer Miklu Silvanto.

As well as respecting the past, the Mozart platform also anticipates the future. Because the platform is packed with processing power and memory, Bang & Olufsen can introduce new features, capabilities, and connectivity over time to ensure an equally seamless experience with home audio settings of the present day and those in the years to come.