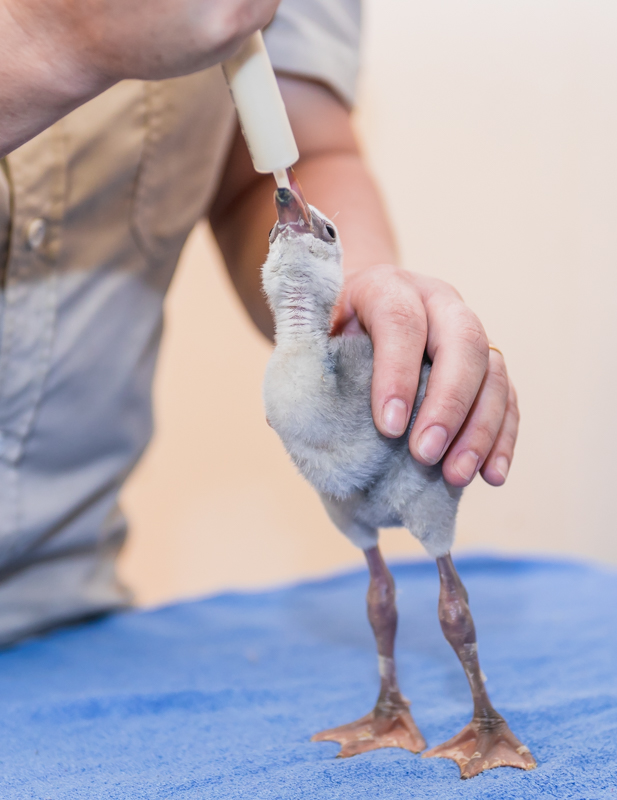 Fluffy, healthy and vocal, the baby Flamingos that found themselves at Montecasino Bird Gardens on 30 January, just one day after their birth and rescue from the drought-stricken Kamfers Dam in Kimberly, are thriving.

Following the life-threatening water shortages in the dam, which led to over 1 500 chicks and unhatched eggs being abandoned, an incredible collaboration between the National Zoological Gardens, National Veterinary Association, BirdLife South Africa, the Kimberly SPCA and various accredited members ofPAAZA (Pan African Association of Zoos and Aquariums), including Montecasino Bird Gardens, World of Birds, SANCCOB, Ushaka Marine World, Lory Park Animal and Owl Sanctuary and Vulpro, resulted in the rescue of the baby birds.

The small group of chicks that were airlifted to Montecasino Bird Gardens (https://www.tsogosun.com/montecasino/entertainment/bird-gardens), were immediately taken into the care of vets who fought to stabilise them, while the Bird Gardens staff set abought preparing for the gruelling schedule and logistical undertaking of caring for the chicks. The Bird Gardens is an environmental and conservation facility accredited by PAAZA and the World Association of Zoos and Aquariums (WAZA).

“This operation is the largest of its kind. We have a colony of Greater and Caribbean Flamingos at Montecasino and have had good success in rearing babies. We were therefore able to share our feeding formula with the other organisations who adopted the rescued babies from Kimberly. For reasons of bio-security we have had to keep the fledglings separate from our colonies to avoid the risk of spreading disease. The Lesser Flamingo has seldom been reared in captivity,” says Shaun Wilkinson, General Manager at Montecasino Bird Gardens.

Initially requiring round-the-clock feeding and care, the chicks are now stable and on a four-hour feeding cycle. “For the first week they had to be fed every hour,” says Elaine Reeve, (Curator of Birds) who, along with Michelle (Assistant Curator of Birds), Dr Jessica Briner (Veterinarian), and Theo Nel (Curator of Reptiles), have dedicated their time to the rearing of the fledglings. Surviving on only a few hours’ sleep a night, the team, along with volunteers, have been feeding the babies a mixture of fish, shrimp, egg and baby cereal. The mixture is sieved to remove any chunks, liquidised and then carefully syringed down the baby’s beaks at a 35-degree angle. “Each baby has been microchipped and is scanned at every feed to ensure each one is fed the correct amount. There is a degree of skill required to feed them as they can easily aspirate if fed too quickly,” says Wilkinson.

Mike Page, Director of Operations and Complex GM of Montecasino, adds, “As part of our responsibility as an accredited member of the zoological community we are in the privileged position to be able to collaborate with fellow organisations and fund the feeding and rearing of the baby flamingos. It has been heart-warming to be joined in spirit and donations by many members of the public.”

The babies are housed in temporary enclosures based on their weight, with infrared lights providing the perfect temperature for them to thrive, with an array of teddy bears and feather dusters to provide them with comfort. The cacophony of squawks that heralds an imminent feeding time is reassuring evidence of their growing strength.

“The fledglings will be weaned between 30 and 40 days after birth, and once they start filter feeding we will put them onto flamingo food. We are all working towards reuniting the colony and releasing them back into the wild, hopefully in May,” concludes Mandla Mngomezulu, Property Manager of Montecasino.

For more information on the conservation programmes at the Montecasino Bird Gardens, go towww.montecasino.co.za or follow #MonteCares on social media.