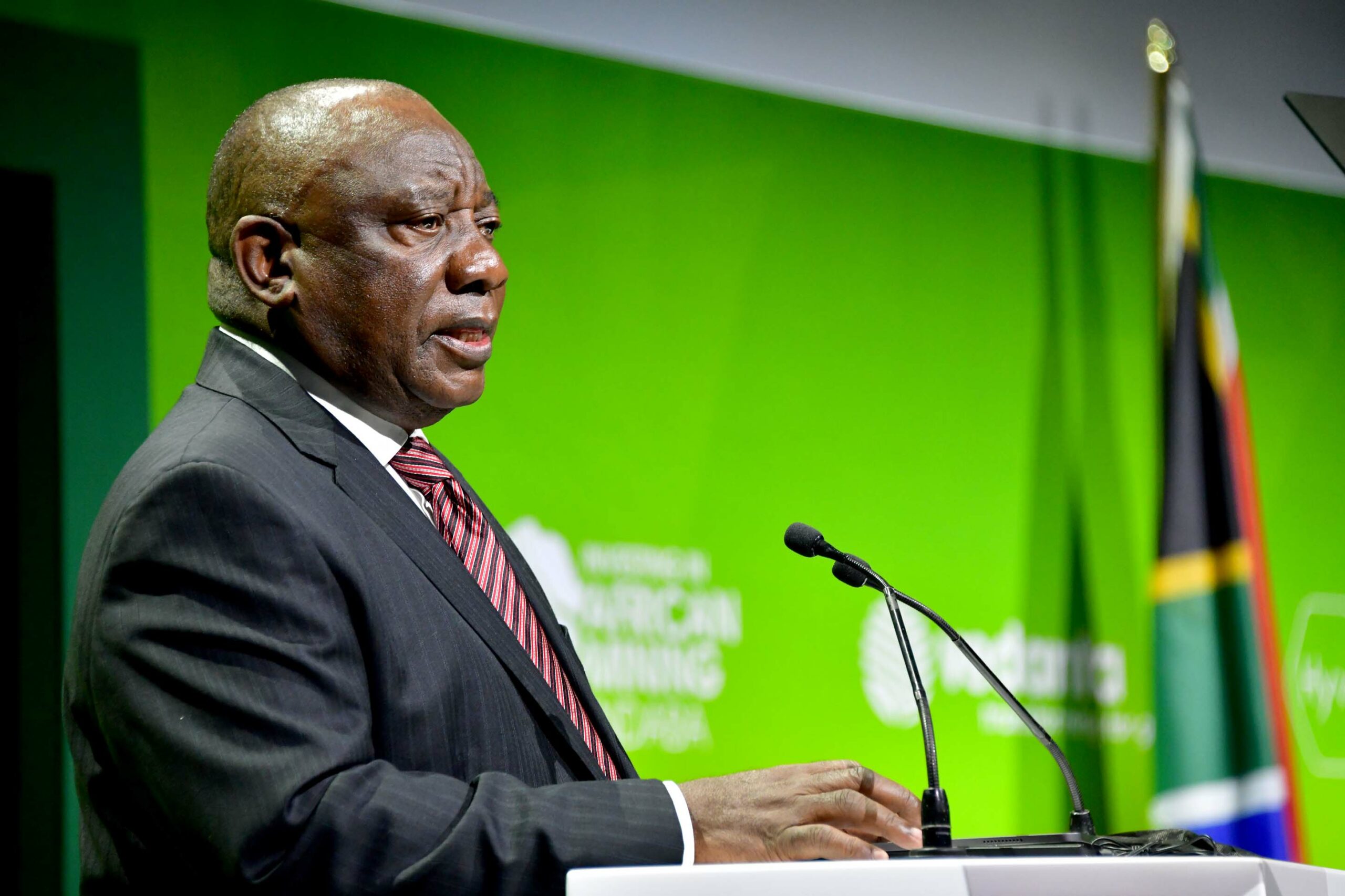 This Mining Indaba is taking place at an important moment in the global recovery from the effects of the COVID-19 pandemic.

Across the world, almost every industry is having to adapt to new circumstances, confront new challenges and be prepared to seize new opportunities.

The mining industry in Africa is no different.

As it responds to the effects of the pandemic, the mining industry also needs to manage the risks and potential benefits of rapid technological change, shifting market demand, climate change and geo-political uncertainty.

Like all other industries, the pandemic caused significant disruption to mining operations.

But once again, the industry has shown its resilience.

In South Africa, mining registered growth of 11.8 per cent in 2021, the highest across all industries. Last year the sector recovered production to almost pre-COVID levels.

This was the result of significant collaboration between the Department of Mineral Resources and Energy and the Minerals Council South Africa, including efforts to keep the sector operational during the hard lockdowns in the pandemic’s early stages.

After more than 150 years, mining remains a critical pillar of our economy.

Mining is a significant contributor to export earnings, it is an important source of foreign direct investment, and directly employs nearly half a million people.

And we expect mining’s significance and contribution to our economy to grow.

Like many other parts of our continent, our country is abundantly blessed with vast mineral deposits that form the basis of the most important applications used in society and economies today.

At the fourth South Africa Investment Conference earlier this year, investments valued at around R46.5 billion were pledged towards mining and mineral beneficiation.

Despite the great prospects for South African mining, we face significant challenges.

It is a matter of grave concern that South Africa has fallen into the bottom 10 of the Fraser Institute’s Investment Attractiveness Index rankings.

We are currently standing at 75th of 84, which is our worst-ever ranking.

This ranking underlines the fundamental reality that South Africa needs to move with greater purpose and urgency to remove the various impediments to the growth and development of the industry.

We understand very clearly the need to fix to the regulatory and administrative problems.

We need to clear the backlog of mining and prospecting rights and mineral rights transfer applications, put in place a modern and efficient cadastral system, and implement an effective exploration strategy.

We understand very clearly the need to significantly improve the functioning of our railways and ports, and the vital importance of ensuring a secure and reliable supply of affordable electricity.

These tasks are at the forefront of our economic reconstruction and recovery efforts.

Since the last Mining Indaba, we have made significant headway in driving a programme of policy reform for the network industries that are inextricably tied to mining and its operations.

This programme is being coordinated through Operation Vulindlela, an initiative of the Presidency and National Treasury, working in partnership with the Department of Mineral Resources and Energy and other departments.

An important area of progress is regulatory reform to facilitate new electricity generation by the mining and other sectors.

Regulations have been amended to allow companies to invest in new generation capacity of up to 100 MW without needing to apply for a license.

We are working to further cut red tape for the registration of projects, to accelerate environmental approvals and to strengthen the capacity of Eskom and municipalities to link such projects to the grid.

According to the Minerals Council South Africa, around 4,000 MW or R65 billion of such electricity generation capacity investment is in the pipeline.

The unbundling Eskom into separate entities for transmission, distribution and generation is on track, and is set to be completed later this year.

Operation Vulindlela is working with the Department of Water and Sanitation to implement a turnaround plan for the issuing of water use licenses, something that is critical to mining operations.

We are working towards a target of 80 per cent of all applications being resolved within 90 days.

On Transnet, the publication of the White Paper on National Rail Policy outlines our plans to revitalise rail infrastructure and to enable third party access to the freight rail network.

We have heard the calls from the industry for private operators to be allowed to operate the country’s dedicated coal, iron ore and manganese lines.

We hope that such proposals will be discussed at the Indaba, drawing on the experiences of other countries.

Working together with the industry and other stakeholders, we are strengthening the capacity of our security services and law enforcement agencies to tackle illegal mining, cable theft and general damage to infrastructure.

We value our ongoing collaboration with the Minerals Council South Africa to resolve these and other challenges facing the industry.

According to companies surveyed by the Minerals Council if these regulatory hurdles could be resolved, they would be prepared to increase their investments by 84 per cent over the next five years, over and above existing capital investments.

We are committed to mobilising the necessary resources and providing the necessary incentives for a new wave of exploration, particularly of the minerals required for the global energy transition.

The recently-released Exploration Strategy and Implementation Plan lays out South Africa’s plans to move to future strategic metals such as copper, nickel, cobalt and rare earths.

As a world leader in platinum group metals, South Africa is perfectly poised to take advantage of the growing demand for such metals.

At the same time, we must continue to expand the production of some of the minerals that have been the mainstay of our mining industry, and for which there is still much demand.

We are keen to harness the opportunities of the hydrogen economy.

Last week, I attended the launch by Anglo American of the world’s largest hydrogen-powered mine haul truck.

This truck will be powered by an entire ecosystem of hydrogen production centered around the mine itself.

We aim to be not only an important hub for the production and export of green hydrogen, but also of green ammonia, green iron and steel, and sustainable aviation jet fuel.

South Africa’s Hydrogen Strategy is aimed at stimulating and guiding innovation along the value chain of hydrogen and fuel cell technologies.

This will not only sustain demand for PGMs but also position South Africa to derive benefits from supplying high value-added products.

As a continent that has such a rich abundance of resources, Africa needs to beneficiate its mineral endowments for the benefit of the current and future generations.

In our onward march towards a low-carbon future it is critical that our efforts are both realistic and sustainable.

We have resuscitated the successful Renewable Energy Independent Power Producers Procurement Programme, with plans to substantially upscale investment in wind and solar power.

We are diversifying our energy mix under the Integrated Resource Plan.

We have supporting legislation to mitigate and adapt to climate change.

In line with our just transition efforts, we are in the process of mobilising international finance as part of the effort to ensure that affected communities and existing industries are supported.

It is clear that as our reliance on coal is reduced, pathways towards new economic activity needed to be created for workers in affected industries.

As we confront the reality of energy insecurity and the development of new energy sources, it is critical that South Africa, like all developing economies, be given the necessary developmental space.

Countries on the African continent need to be able to explore and extract oil and gas in an environmentally-responsible and sustainable manner.

These resources are important for energy security, for social and economic development, and for reducing energy poverty on the continent.

It is important that as we undertake a just energy transition, we adhere to the principle contained in the UN Framework Convention on Climate Change of common but differentiated responsibilities and respective capabilities.

The growth and development of mining in South Africa will not be possible unless the working and living conditions of mineworkers and mining communities are improved.

It is important that mining companies engage with labour in the spirit of partnership and cooperation.

It is vital that mine safety and the health of workers becomes the industry’s foremost concern. On this there can be no compromise.

I wish to comment the mining sector for the financial and logistical support it has given to the roll-out of South Africa’s COVID-19 vaccination programme.

Drawing on its extensive experience with managing other communicable diseases such as TB and HIV, the mining sector has been able to manage the pandemic carefully and systematically.

The partnership between government and the Minerals Council of South Africa stands as a fine example of how the private sector can support a nation’s development agenda.

In undertaking its vaccination programme, the mining industry has also demonstrated its responsibility to the communities in which its operations are located.

It is important that this commitment is sustained in all areas of development, including through the effective implementation of Social and Labour Plans, responsible environmental practices and local procurement.

The future of mining on the African continent holds great promise.

It holds great promise for investment, for industrial development and for growth.

We have a shared responsibility – as governments, as mining companies, as labour and as communities – to realise that promise.

As the government of South Africa, we are firmly committed to fulfil our responsibilities and to remove all impediments to the growth, sustainability and prosperity of the mining industry.

We are firmly committed to ensuring that mining occupies its rightful place as an industry of the future.