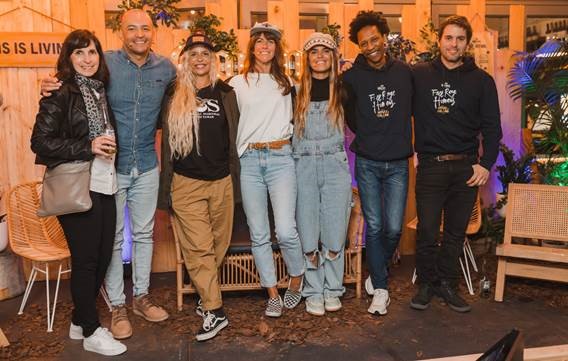 The international premier of season two of the hit, short format documentary series, Free Range Humans, took place in Cape Town yesterday, attended by five of the six international eco-activist cast members who have heeded the call to help save the planet, its diverse ecosystems and marine life.

Also in the cast is South Africa’s Loyiso Dunga who is fighting to help save the ‘Great African Kelp Forest’, the only forest of giant bamboo kelp on the planet, which stretches from the Cape north for more than 1000km into Namibia.

With South Africa setting the stage for the global roll out of Free Range Humans – Nature Is Calling, urban hotpots in Cape Town and Johannesburg have also been transformed with natural settings, intended as a wake-up call to humanity to reconnect with nature to protect the planet as well as reap the health benefits. Today, city dwellers (more than 50% of the world’s population *) spend 95% of their lives indoors with a profound disconnect from nature resulting in numerous physical & mental health deficiencies.

“The series is an attempt to bring legitimacy to the call for protecting natural spaces – both urban and wild – by illustrating that being immersed in nature directly benefits our well-being, including happier, more creative lives. Sometimes saving the environment seems overwhelming but we all can do something to protect the planet and Free Range Humans – Nature Is Calling is about six people who are doing just that,” said Melanie Nicholson, Marketing Manager: Corona.

The first episode features South Africa’s Loyiso Dunga, the “Kelp Keeper” from Cape Town, who has been studying kelp for over 10 years and has dedicated his life to educating people about their importance in our ecosystem.

“For millennia, these marine jungles have benefited humans as they produce more than half the oxygen in the atmosphere and help sustain us. Today, kelp forests of the world are facing degradation at a crucial time where our connection with mother nature has been largely severed. To turn this tide, we must remember who we are and in turn hold the line. I feel incredibly blessed knowing that I am doing something that fulfills my purpose and is doing good for the planet,” says Loyiso Dunga.

Importantly, the people featured in Free Range Humans – Nature Is Calling are not merely visitors to the free-range, environmentally-conscious lifestyle and who then retreat, back to their city cages. Rather, it is about those who have left it all behind to live authentic lives and do good for the planet at the same time.

Shot in six countries, in a short format TV show structure, Free Range Humans – Nature Is Calling also features French Polynesian environmentalist Maoritai Tehito who has dedicated his life to saving what remains of the world’s corals; Canadian Jessica Hutchinson who is working to restore Pacific Salmon ecosystems which have been lost to habitat destruction and over-fishing; Chilean Santiago Figuero who works to save endangered desert cacti habitats; Mexican/Argentinian Martina Alvarez, a shark advocate who dives with the ocean’s most feared predator to bring awareness to their plight (over 100+M sharks are killed annually due to illegal fishing) and; Brazilian Zenilton “Tinho” Pereira who has dedicated the last 18 years of his life to protecting turtles, one of the ocean’s most endangered species.

Those inspired by the stories of the show’s ‘Free Range Humans’ are also encouraged to apply for Corona’s Free Range Fund. The Fund will award six US$10,000 grants globally to serve as seed money for recipients to take the leap and answer their unique call from nature.

“Corona is a brand that believes we find our best selves in the outdoors, but our planet is under more pressure than ever – and it needs our help. We must do all we can to protect our paradise – it’s the only one we have,” adds Melanie Nicholson.

All episodes of Free Range Humans – Nature Is Calling from Corona Studios are now streaming on Corona’s YouTube channel.