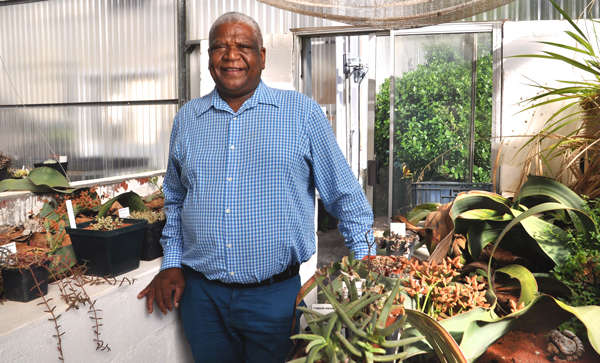 For over 45 years, Andrew Jacobs has become well known for his warm, bubbly personality, affable smile and ability to make his enchanting tales about one of the world’s most famous garden appeal to, and inspire, any visitor, botanical boffin or otherwise.

Andrew joined Kirstenbosch as a youngster in January 1976 and today he still works as a Communications Officer and Tour Guide at Kirstenbosch National Botanical Garden.

Those who have had the pleasure of enjoying one of Andrew’s much-loved guided tours will tell you that his light-hearted, yet passionate manner and highly informative narrative instantly connects with audiences of all ages. He quite literally makes the garden come alive as he paints with his words.

Often, the young families that join his guided tours, have sceptical and reluctant husbands, kids or teenagers that deem a botanical garden tour to be a total drag. However, scepticism quickly turns into conversion, as tour guests of all ages constantly walk away enlightened and in high spirits.

Andrew is one of 12 children and coincidently, his dad also worked at Kirstenbosch for many decades. Andrew’s journey to the greener grass on the other side began in the nursery under the guidance of Walter Wisura, who had immense knowledge of succulents, teaching Andrew how to create cutting seedlings and tending the older plants.

When reminiscing about his life as a young child growing up in Protea Village, where in 1968 his family was forcibly removed, seeing them relocate to Lotus River, he admits it is a sad part of his past. But he quickly brightens the mood by saying that when he finished school and he came to work at Kirstenbosch, the people that came into his life, such as botanists Walter Wisura and Ernst van Jaarsveld, took him under their wings and mentored him with their invaluable knowledge of succulents and trees. As importantly, they also supported him emotionally and gave him the freedom, space, and confidence to use his own initiative at a young age – in Andrew’s own words, “Ernst van Jaarsveld specifically gave me a paradigm shift”.

In 1979, Andrew was appointed Plant Recording Officer, working alongside Michelle Botha. In the engraving department, he had to follow an intricate process of creating plant boards by hand, which heightened his attention to detail. Some of his boards can still be seen today at Kirstenbosch.

Going back to Andrew’s mentors, he recalls that in the 1970s, Ernst van Jaarsveld treated everyone the same, regardless of race, even when discrimination was still rife in the country. He and Ernst enjoyed many pap-fuelled field trips together, which were significant not only for his acumen advancement, but also for building camaraderie. They travelled to Pretoria, Potchefstroom, and Namaqualand – where he stayed with Ernst at his family home. They also visited the border of Namibia in the Richtersveld and hiked mountains for what they call ‘collecting trips’, to learn about the natural habitat of the species, specifically to recreate the right environment in the conservatory, that to this day exhibits plants from a number of different regions, including savanna and the Karoo.

Andrew still walks past sections of Kirstenbosch that offer fond memories of his father, who worked with John Winter in the 1970s when they were developing the special yellow-flowering Mandela’s Gold Strelitzia. The normal flower colour for strelitzias is orange, and yellow-flowering plants are natural variants that crop up infrequently. Andrew explains that to get yellow-flowering plants to produce more yellow plants, one must cross yellows with yellows. The process is both intricate and delicate, which includes hand-pollinating the flowers with pollen from yellow plants. Strelitzias are also slow-growing and take three to five years to flower.

Strelitzias flower in autumn, winter, and spring. The Mandela’s Gold Strelitzia can be seen at the bust of Mandela at the Visitors’ Centre entrance to the Garden, beside the Concert Stage lawn and behind the annual spring display beds.

In 1983, Andrew joined the Information Office and completed his Tour Guide certification at the Livingstone Tourism Academy in 2007. He has giggly memories about starting out as a rookie guide and how shuttle driver Ron Ferguson, a true Englishman and a gentleman, helped him with language delivery and how best to explain complex botanical jargon in a captivating way to his audience.

Andrew was also instrumental in developing the three main fynbos flora sections, those being Protea, Erica and Restios, still a very prominent feature in the Garden, where pathways were built and sections expanded to what it is today.

Over the years, Andrew has had many highlights in his career and having the opportunity to join the team at the prestigious Chelsea Flower Show in 1989, travelling to Scotland to the Hutchinson Hall, then again in 1997 and 2013, stand out the most for him.

He has also rubbed shoulders with many celebrities such as multiple Oscar winner Meryl Streep. He regrets not having a photo with her, as she wore a scarf to deter the paparazzi and he respected that she, her family and friends just wanted to enjoy a normal experience like everyone else in the Garden.

Asked about holding the hand of the President of Mauritius, Mrs Ameenah Gurib-Fakim, Andrew’s face lights up and he grins sheepishly, saying it was only to guide her on the rocky steps of the Protea garden. He even sang the words “I wanna hold your hand” by the Beatles to break the ice. Other notable visitors that joined Andrew’s tour were Dr Paul Bremer and his family and they became lifelong friends and are still today with his grandchildren.

Andrew Jacobs is known as one of the Garden true legends and a role model. Every year he hosts the Geographical Adventure Tours and the third year Botany students from the University of Johannesburg. He is also a champion for SANBI and Kirstenbosch, sharing knowledge and educating on the conservation, sustainability, appreciation and enjoyment of South Africa’s exceptionally rich biodiversity for all South Africans.