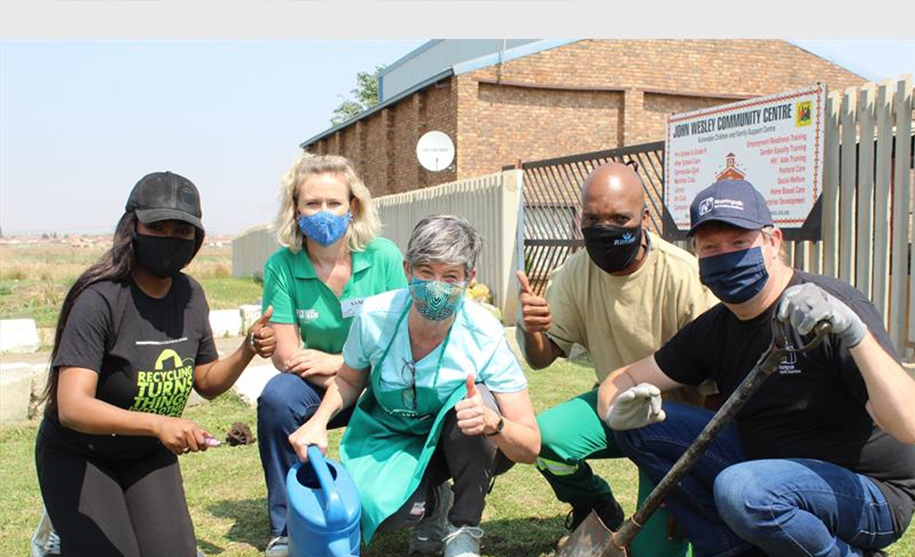 50 bags of trash and recyclables collected and 10 Pepperbark trees planted to mark National Clean-up and Recycling Week and Arbor Month.

On Friday September 18, National Recycling Day, the paper and paper packaging industry teamed up for a “Trash and Tree Day” in Daveyton, Benoni, to mark Arbor Month and National Clean-Up & Recycling Week. The day included a litter clean-up in the surrounding veld and wetland, delivered recycling units and tree planting at John Wesley Community Centre, with some Jerusalema fun added to the mix.

In collaboration with CreationCare and Etwatwa Greening Team, representatives and members of Paper Manufacturers Association of South Africa (PAMSA), RecyclePaperZA and Fibre Circle, the producer responsibility organisation for the sector, collected 32 bags of rubbish and 18 bags of recyclables in just over 60 minutes, and planted 10 Pepperbark (Warburgia salutaris) saplings.

Arbor Month, celebrated annually during September, calls on South Africans to plant indigenous trees as a practical and symbolic gesture of greening communal spaces. “Arbor Month is also important to the forestry and paper industry as the farming, harvesting and replanting of trees provide us with everyday wood and paper products,” says Jane Molony, executive director of PAMSA, adding that sustainably sourced wood and paper products do not come from indigenous trees but instead from the 1.2 million hectares of commercially farmed trees around the country. “Our sector is key to fighting climate change as our farmed trees not only absorb carbon dioxide from the atmosphere but also ensure that the carbon remains locked up in wood and paper products.”

Sappi Southern Africa donated 10 Pepperbark saplings to John Wesley Community Centre. The bark of the slow-growing Pepperbark tree, which contains powerful healing properties, is in demand at traditional muti markets and has been heavily harvested in the wild. The tree is now protected by law, and classified as a threatened and endangered species. Using its tree breeding and production expertise, Sappi started a project in 2011 to propagate the trees from cuttings for distribution to rural communities and the Sappi Shaw Research Centre near Pietermaritzburg has also been working on seed propagation as well as pest control.

National Clean-Up and Recycle Week, which takes place during the third week of September, is an annual initiative, supported and endorsed by the various packaging streams and retailers.

“This year we wanted to make a tangible contribution to a local community by supporting them in cleaning up a small area around the John Wesley Community Centre in Daveyton,” says Anele Sololo, manager of RecyclePaperZA. “Our mascots and school presenter team also had fun with some of the children, educating them about littering and recycling.” All 100 children attending preschool at the centre also received a goodie bag from Mpact Recycling.

As part of its schools and community programme, Mpact Recycling provided the centre with bins and bags for the separation of white paper, brown cardboard boxes, milk/juice cartons and mixed paper. These four paper grades provide recycling mills with reusable paper fibre for the production of packaging and tissue products. “John Wesley Community Centre will now be able to generate funds for the recyclables it collects,” says Mbali Pakati, procurement representative for Mpact Recycling, adding that the centre joins about 860 schools and communities on its programme in Gauteng. Mpact Recycling also donated 100 goodie bags for the preschool.

Through Nampak Liquid Cartons, 250 units of Mojo Water and Number 1 Mageu were donated for the day’s events. Terence van der Walt, new business development manager for Nampak Liquid Cartons, was there: “It was great to participate in the clean-up and tree planting ceremony. Trees are the lungs of our planet. They filter the air that we breathe, as do the sustainably managed trees that we later turn into cartons.”

Paper-based cartons – used for milk, juice and even dry food – are recyclable in South Africa. “Cartons are also renewable,” says van der Walt. “The greater the demand for cartons, the more trees we plant, and the better for the environment.”

“We are grateful to Econamic Recycling for the donation of gloves for our clean-up, Neopak for T-shirt donation for the centre staff and to Kimberly-Clark which presented tissue products to the centre as well as representatives of the Benoni-based Litterbugs clean-up crew,” notes Sololo.

As a belated commemoration of National Book Week, PAMSA is also donated locally written and published books to the centre’s reading corner.

Speaking on behalf of CreationCare, Lisa Johnstone said, “Each one of us has a role to play in preserving nature for human well-being. As individuals we must become more conscious consumers. If we are to become custodians of nature, we must first start with ourselves and learn about what we can do.”

Sololo concludes, “Once again we are grateful to the [Dot]GOOD team for helping us pull it all together.”