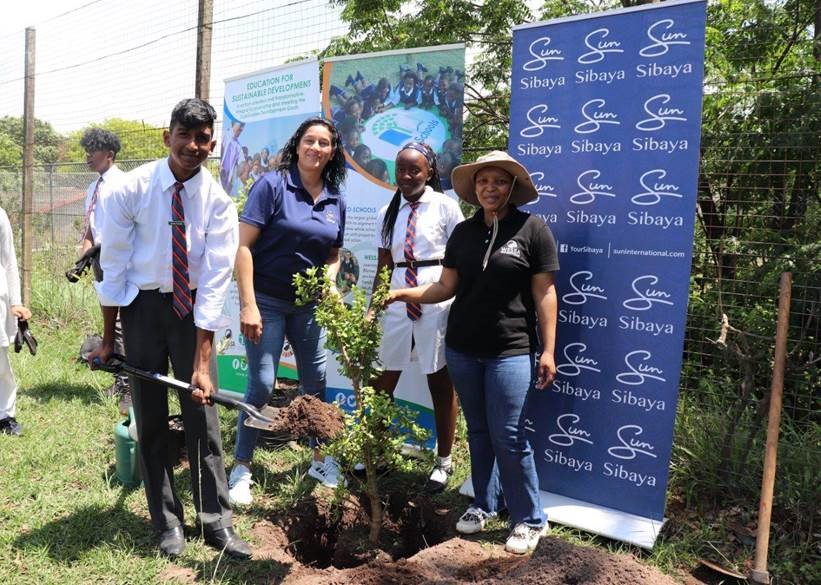 Fighting climate change through cleaning and greening the environment

Learners at Phoenix Secondary School have joined a worldwide movement initiated by young people concerned about climate change and global injustice as they marked International Day of Climate Action on November 9.

The programme of waste management and climate change formed part of the two-year eco-schools programme being run nationally by Sun International and environmental NGO The Wildlife and Environment Society of South Africa (WESSA), to build environmental resilience in schools and their communities.

“Sun International’s Sibaya Casino & Entertainment Kingdom sponsored Phoenix Secondary as it is one of the schools within our community,” said Karen Hammond Sibaya’s HR Manager. As part of the WESSA partnership, Sibaya has invested R215 000 across Sterngrove Primary and Glenhaven, Waterloo, Phoenix and Palmview secondary schools.

International Day of Climate Action saw a handover over of recycling bins sponsored by Sun International as well as a school ground clean-up campaign, planting of indigenous trees and Spekboom, said to remove carbon dioxide from the atmosphere.

“WESSA facilitated an awareness programme on the impact of litter on human health and the environment,” said WESSA project manager Nomfundo Ndlovu. “Through this event we will mobilise and educate the community of Phoenix Secondary to work towards keeping their environment clean. We really hope these teachings will impact behaviour change and that the learners will take what they have learnt at school and apply it at home.”