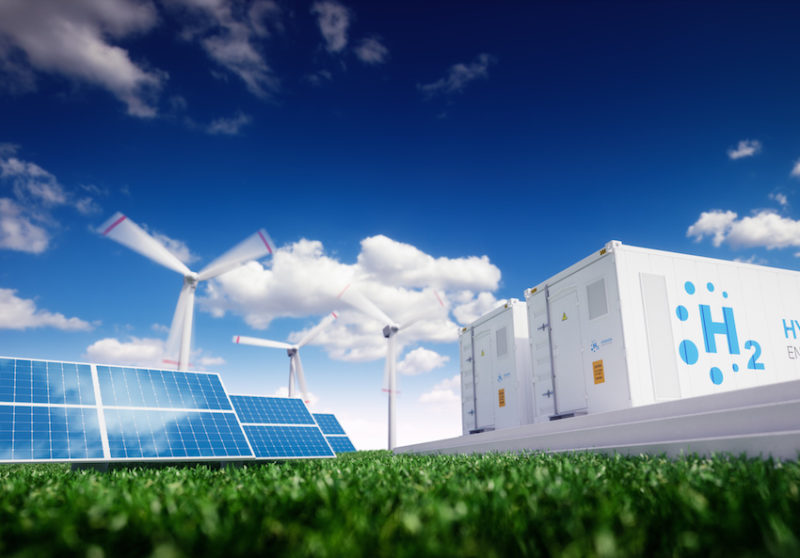 Green hydrogen is essential in South Africa’s new energy mix due to its important role in combatting climate change and delivering on decarbonisation targets. In the last year, several substantial developments with regard to South Africa’s green hydrogen policy, and public and private sector commitments have been announced. The latest big announcement came in early November 2021, when South African President Cyril Ramaphosa confirmed that South Africa had secured a commitment of USD 8.5 billion from the United States, the United Kingdom, France, Germany and the European Union, to be used to speed up the country’s transition to a green economy, with a particular focus on phasing out coal. This commitment, which was agreed at the United Nations Climate Change Conference (COP26) in Glasgow, will also support investment in green hydrogen production.

The announcement followed Deputy Minister of Trade, Industry and Competition, Fikile Majola’s confirmation in October 2021, that his department was in the process of reviewing its Critical Infrastructure Programme, with the view to assist in alleviating some of the infrastructure costs associated with hydrogen production, fueling and transport facilities. The deputy minister was speaking at a webinar on hydrogen titled “Hydrogen Economy – An Opportunity for South Africa to Create an Inclusive Energy Sector with Significant Black Participation.”

Earlier in October 2021, the South African government and private-sector partners released a feasibility study, which identified three green hydrogen hubs in the eastern part of the country that had the potential to form a hydrogen valley. The study also identified nine pilot projects in the mobility, industrial and buildings sectors, and looked at opportunities for the export of green hydrogen. To export green hydrogen, South Africa must develop the infrastructure to store and transport either green hydrogen or green ammonia.

This study came a few weeks after the government approved the development of the Hydrogen Society Roadmap, on 14 September 2021. The Roadmap is intended to prepare the country for a hydrogen economy and is being developed by the Department of Science and Innovation, Hydrogen South Africa (HySA), government and industry stakeholders. It focuses on national ambitions, sector prioritisation, overarching policy framework and the macro-economic impact of the hydrogen economy throughout South Africa. The release by Government of the Hydrogen Society Roadmap will hopefully occur before the end of 2021.

A few months prior to this, in July 2021, Sasol Limited and the Industrial Development Corporation (IDC) concluded a memorandum of cooperation to jointly develop and shape an enabling environment to advance South Africa’s green hydrogen economy. Under this memorandum, the parties said they would collaborate to advocate for enabling policy frameworks, develop pilot and commercial scale hydrogen projects, access local and international financing options, and pursue strategic projects that benefit the country’s energy transition and economic development goals. At the Africa Green Hydrogen Forum, held in November 2021, Sasol announced that it aimed to start producing green hydrogen by 2023.

In June 2021, the “Super H2igh Road Scenario for South Africa” report was published, which demonstrated how green hydrogen could lead to a win/win situation for South African employment and its decarbonisation goals. The study, which was commissioned by the German green energy think-tank, Agora Energiewende, highlighted South Africa’s potential to become a key exporter of green hydrogen, and cut its greenhouse gas emissions by 70%, if it were to capitalise on opportunities presented by the hydrogen economy. A month earlier, German development bank KfW initiated a EUR 200 million programme to support the establishment of green hydrogen projects in South Africa. The Council for Scientific and Industrial Research (CSIR) and Meridian Economics were appointed by KfW to help it identify and evaluate high-potential projects for implementation.

In April 2021, the Department of Trade, Industry and Competition outlined the steps it had taken thus far to support the development of the green hydrogen economy in South Africa. These included mandating the IDC to be the commercialisation champion for South Africa’s hydrogen economy, to partner with the private sector in funding opportunities across the hydrogen value chain, and the start of the local production of fuel-cells. These announcements were made by the Minister of Trade, Industry and Competition, Ebrahim Patel, at a webinar titled “Renewable Hydrogen and Green Powerfuels.”

An earlier report, this one focusing on power fuels and green hydrogen, was published by the CSIR in February 2021. The report confirmed South Africa’s advantage in producing and exporting green hydrogen due to its wind and solar resources and vast platinum group metals (PGMs) reserves. South Africa holds 75% of the world’s platinum reserves and is the world’s largest producer of PGMs. PGMs can act as catalysts during the electrolysis process that converts water into hydrogen and oxygen. As such, a zero-carbon hydrogen solution is one of the key evolving end-uses for PGMs. Also in February this year, President Ramaphosa announced the government’s plans to establish a Platinum Valley, bringing together various hydrogen applications to form an integrated hydrogen eco-system.

South Africa has been looking at hydrogen as an alternative source of clean energy for some time. Hydrogen South Africa or HySA was officially launched in 2008 by the then Department of Science, Technology and Innovation (now the Department of Science and Innovation). Its objective was to develop the hydrogen economy with a distinct focus on drawing in PGMs. Ten years later, on 4 December 2018, the Department of Science and Innovation and the South African Agency for Science and Technology Advancement (SAASTA) hosted the 30th International Partnerships for Hydrogen and Fuel Cells in the Economy (IPHE) Steering Committee Meetings and a year later, in 2019, the HySA Infrastructure team was tasked with conducting a study to determine the costs of transporting hydrogen by land and sea, including shipping to Japan.

A report by Baker McKenzie – Shaping Tomorrow’s Global Hydrogen Market (report), outlined how, within just a few decades, all the world’s energy needs, electricity, industry, transport, buildings and agriculture, will have to come from carbon-free sources. This will require huge changes in little more than a single generation, and will need innovative solutions, technologies and policies. The report shows that hydrogen will play a crucial role in making this fundamental change to the globe’s energy systems.

The last year has been an important one for the green hydrogen industry in South Africa and the pace of developments with regard to government policy, public and private sector research, plans and commitments, has increased substantially. The green hydrogen sector is key to South Africa’s just energy transition, and further developments that outline the country’s readiness to begin taking full advantage of its hydrogen energy potential are to be expected.