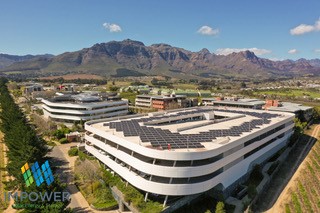 The largest retail bank by client numbers and the biggest digital bank in South Africa, Capitec, has commissioned leading EPC solar installation company, Impower, to design, install, and maintain a ground-breaking solution that integrates both solar and an innovative battery backup system.

The banking giant has turned to solar as a long-term solution to reduce its reliance on the grid, minimise energy costs and play its part in contributing toward net zero. The high-level design specification installed by Impower includes:

Over and above the large-scale solar installation, Impower is supplying Capitec with a ground-breaking battery backup system that ultimately reduces peak energy costs.

While conventional battery backup systems typically remain idle until a power outage occurs, this innovative design performs peak-shaving. Thus, by investing in Impower’s battery backup system, Capitec can now consume energy within peak times whilst simultaneously trimming costs. Further, such designs can be integrated with diesel generators to provide another layer of energy reliability and reduce operational spend on diesel.

Importantly, the return on investment of the battery system is impressively minimal. Approximately 2 years ago, the payback period was 7.5 years in contrast to today’s which stands at approximately 3 years. These remarkable results are due to the cyclical nature of the technology which ultimately generates revenue in the short to medium term.

The positive impact of public-private partnerships cannot be underestimated, and this project is no exception. Capitec has been a longstanding client of the Stellenbosch Municipality which has played a monumental role in assisting the bank to acquire their SSEG application.

Any system greater than 350kW must undergo a grid integration study, which is a systematic framework used to assess a power system with high penetration levels of variable renewable energy (RE).  At 715kW, this project was deemed a candidate for the study and thanks to the timeous and efficient receipt of all the required information from the Stellenbosch Municipality, Capitec’s evaluation was seamlessly and successfully conducted. The financial entity submitted the study, and their small-scale embedded generation (SSEG) application was approved, subsequently representing the largest SSEG approval to date by the local municipality.

With a firm commitment to reduce carbon emissions, Capitec is certainly on the right track by collaborating with Impower, the trailblazers of the renewable energy industry.

By drastically increasing their dependence on solar as an energy source, this solar project will result in minimising 22 211 tons of CO2 over the lifetime of the project.