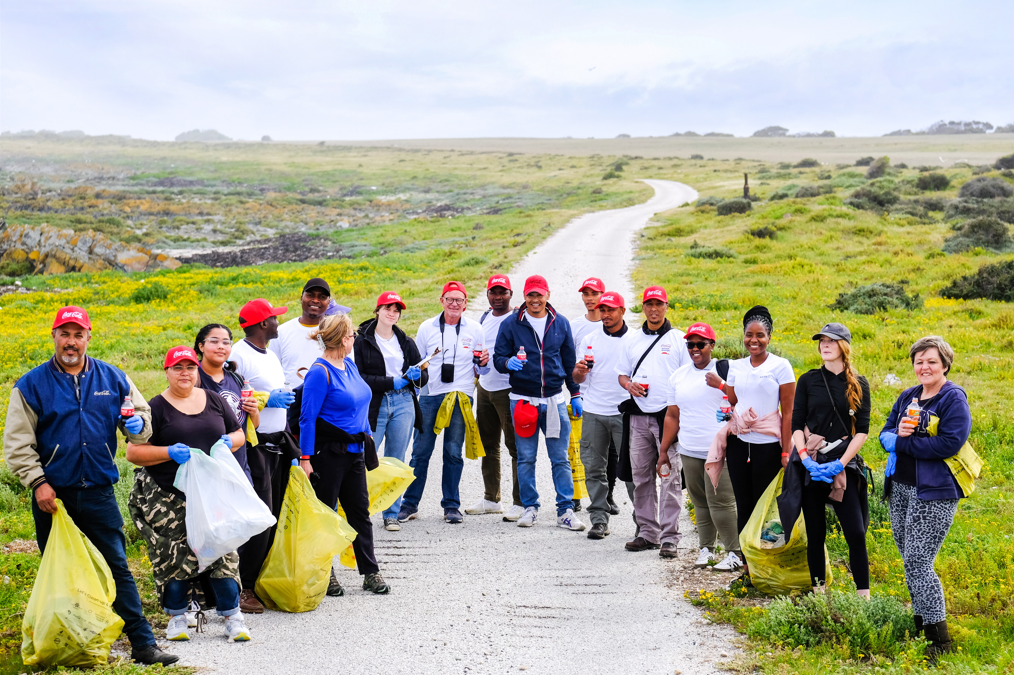 “My and your relationship with our oceans has to improve fundamentally if we are going to preserve life on this planet as we know it”. These were the words of Sabelo Madlala, Environmental Manager at Robben Island Museum (RIM), in observing this year’s International Coastal Clean Up Day (Saturday, 17 September) on the island.

Through an enduring partnership with Coca-Cola Peninsula Beverages (CCPB) and the RIM team, more than 150 volunteers and environmental partners cleared a huge amount of waste that had washed up around the island in the past few months. Thanks to these volunteers the campaign exceeded its target of 500 bags been filled.

Robben Island, a World Heritage site – draws more than 300 000 visitors annually and is also home to a large variety of animal and bird life and flora species. Unfortunately, it also attracts large volumes of pollution and waste, through the passing ships, shipping lanes and land-based sources such as careless littering on beaches, as well as rubbish from Cape Town’s stormwater drains and rivers that flow into Table Bay.

This affects many marine animals and sea birds, either becoming entangled in or ingesting harmful objects. The goal of the coastal clean-up day is to promote greater environmental conservation awareness and to enhance and preserve ecosystems around the island. Supporting International Coastal Clean-Up Day is also in line with The Coca-Cola Company’s global commitment of creating a World Without Waste – a campaign committed to collecting and recycling the equivalent of every bottle and can product that is sold, by 2030.

Madlala said that part of their strategic focus in understanding how they can protect the natural environment, is to try and improve the public’s relationship with the ocean and educate them about the devastating impact of their often, thoughtless behaviour.

“Partnerships with companies like CCPB not only help us to protect the wildlife but also build on conservation programmes to educate the public about the devastating outcome of littering,” adds Madlala.

Priscilla Urquhart, head of Public Affairs, Communications and Sustainability for CCPB said: “This is the third year we are partnering with RIM and local conservation organisations to clean up the coastline around Robben Island. We are always so overwhelmed by the amount of waste that accumulates and will continue supporting the RIM team in protecting the environment.”

Urquhart explains that CCPB’s role in initiatives like this forms part of their commitment to sustainability and being a responsible citizen. “This year we joined forces with The Beach Co-op and Twyg whose mission is to protect, restore and regenerate the integrity of ocean ecosystems. This speaks to our values of protecting the environment we operate in and creating a better world for future generations,” said Urquhart.

The Beach Co-op team will be documenting waste collected on the day and will add it to their research and analysis, including tracking of the Dirty Dozen list of waste culprits.

“We will continue our commitment to protecting our environment and shorelines through community and beach clean-ups throughout the year, working with various partner organisations and taking consumers along the journey of recycling,” added Urquhart.