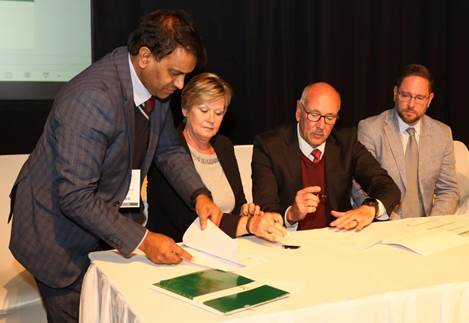 “The purpose of the MoU is to ensure increased cross-collaboration between the government, the IWMSA, and the private sector within the waste management industry in South Africa. The signing of the MoU will allow the Regulator and the Institute to collaborate on and debate matters of mutual environmental interest and find workable solutions to benefit the entire industry role players.

“We are not always going to agree, we sometimes have to agree to disagree, but at the end of the day I think it is all for the purpose of a cleaner and healthier environment”, said Leon Grobbelaar, President of the IWMSA.

“I do think that the signing of the MoU between the Department and the IWMSA really takes us full circle back to the origins of the Institute, which was basically to create a meaningful working bridge between the public and private sector, to be able to progress in the field of effective modern waste management. Moving forward with our initiatives with respect to a Circular Economy, effective waste management, and protection of the environment in general, I would like to congratulate the Department and the Institute for coming together after many months of planning,” said Brendon Jewaskiewitz, Vice President of the IWMSA.

The DEFF also hosted a Circular Economy dialogue session on the second day of the trade fair, where some of the topics discussed by representatives from government and the private sector were:

During the Landfill dialogue session hosted by the IWMSA, examples of successful disposal of waste by means of landfill sites in the Western Cape, as well as financial challenges in meeting the required technical standards, was shared by Eddie Hanekom, Director Waste Management Western Cape Government (WCG).5 Much of the discussion was around whether such stringent technical design standards are required, and whether a more pragmatic risk-based design approach should be followed in order to limit development costs for smaller cash-strapped municipalities.

An interesting point of discussion was that ideally no Healthcare Risk Waste should be directed to landfills, and specifically hazardous waste landfills, as these materials have a high calorific value and can be used as alternative sources of energy, when properly treated at an incineration facility.

A topic that was also debated was whether the significant investment required to establish and operate a technically compliant engineered landfill facility properly is genuinely a problem with respect to limited municipal budgets and expenditure. Jewaskiewitz asserted that there are many instances in municipalities where the finances required are available, however, millions of Rand have been poured into non-compliant municipal dumpsites with little or no improvement to show for it. The New England landfill site, operated by the Msunduzi Municipality, was used as an example of where substantial amounts of money have been invested, and yet the facility is still sub-standard. “Schools have been closed in the area in which the landfill site is operated, due to air pollution from smoke arising from the burning landfill. What must happen before the authorities take note of what is happening, must someone lose their life?” asked Jewaskiewitz, who co-facilitated the dialogue session with Grobbelaar.

Dialogue sessions such as these are of crucial importance to activate the mutually beneficial synergies between government, the IWMSA, and the private sector. It not only evokes great discussions of various the parties’ viewpoints; it also encourages participants to strive to move the waste management industry forward in a sustainable manner, and towards the goal of a cleaner and healthier environment for all of society.

Watch the video where Leon Grobbelaar talks about the Institute’s commitment to the MoU with the DEFF on the IWMSA’s Facebook page and share your thoughts with the IWMSA.

For more information on the IWMSA, visit www.iwmsa.co.za. The IWMSA is also on Twitter. To be sure that you are part of further discussions regarding the future of waste disposal by landfill, register forLandfill 2019.