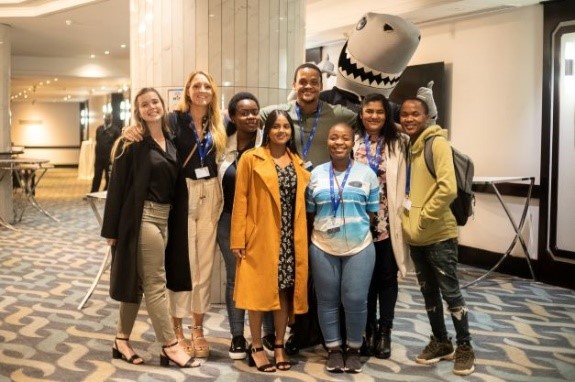 Last week welcomed significant news and positive movement for marine conservation in South Africa – a country that sits in the top five as a global hotspot for shark and ray diversity – as the WILDTRUST announced the launch of its newest marine campaign called ‘ON THE BRINK’.

‘ON THE BRINK’ is a campaign underwriting a 3-year project called ‘Sanctuary for Sharks & Rays’ driven by WILDTRUST, in partnership with the South African Department of Forestry, Fisheries, and the Environment (DFFE) and funded by the Rainforest Trust with co-funding from Oceans 5 and the Shark Conservation Fund.

Sharks and rays are arguably one of the most endangered species on the planet, with it being reported in 2021 by the International Union for Conservation of Nature (IUCN) that a third of the world’s shark and ray species are threatened. We are already too late for two species. The Largetooth Sawfish and Green Sawfish are now considered locally extinct in South Africa.

“This project is a result of many years of collaboration, research, and partnerships in marine conservation. New data is telling us that of almost 90 of some 200 shark and ray species found in South Africa’s oceans, only 28% of their range is currently protected within Marine Protected Areas (5% of our mainland waters). The expansion of 5% to 10% of our ocean in Marine Protected Areas will potentially almost double their protection – protecting up to 50% of their range,” said Dr Jean Harris, Executive Director of the WILDOCEANS programme at WILDTRUST.

In the same week, and also announced at the ‘ON THE BRINK’ launch event, South Africa’s second National Plan of Action for the Conservation and Management of Sharks (NPOA-Sharks II) was released, stating it builds on the achievements and lessons learned from NPOA-Sharks I and closely follows the recommendations of the Shark expert panel that was elected.

“We are very proud of everyone who came on board to collaborate on this plan. It shows everything we have done to change our fisheries and how to improve things. It has a comprehensive roadmap which details how we can conserve our Chondrichthyes in South Africa, from research to management and monitoring. It also has a comprehensive review of the sharks that are caught in our various fisheries and highlights what we have done to reduce catches in sharks with a reduction in catches by 50%,” commented Charlene da Silva, Production Scientist, Fisheries research and development for the National Department of Forestry, Fisheries, and the Environment.

The campaign name and logo, ‘ON THE BRINK’ has made use of negative space in its graphic implementation under the concept that we know what should be there, but it isn’t. The two arrows that make up the non-existent ‘N’ reinforce the concept of extinction vs expansion – that we can either eradicate species from our waters or grow them.

“This is the precipice that ‘ON THE BRINK’ aims to highlight. Negative space allows one to see something that is both there and not there at the same time and this duality defines the message of the campaign. A world without sharks and rays could be the reality for future generations, and its impact runs far deeper than what the general public might assume,” said Lauren van Nijkerk, WILDTRUST Campaign & Communications Director.

42% of chondrichthyan species (sharks, rays, skates and chimaeras) occurring within South African waters are threatened, either Vulnerable, Endangered or Critically Endangered. Two of the 29 species listed as Endangered are South African endemics and only found in our waters – namely the Puffadder shyshark and Twineye skate. However, considering that two species are already considered locally extinct in our waters and with negative trends such as habitat destruction, illegal fishing and fisheries and climate change and economic development gaining momentum – we need to increase protection or risk further extinctions.

The hope is for an additional 5% ocean protection for South Africa in achieving our global commitment of 10%, which will include critical habitats and areas for slow growing species which are late to mature and produce few young. The creation of sanctuaries for sharks and rays in South Africa is critical for their increased protection and the health of our ocean and our people.

South Africa is ‘on the brink’ of expansion for the protection of our sharks and rays, or ultimately extinction for the species – the choice is ours.

Please follow ‘ON THE BRINK’ here for campaign updates and actions: