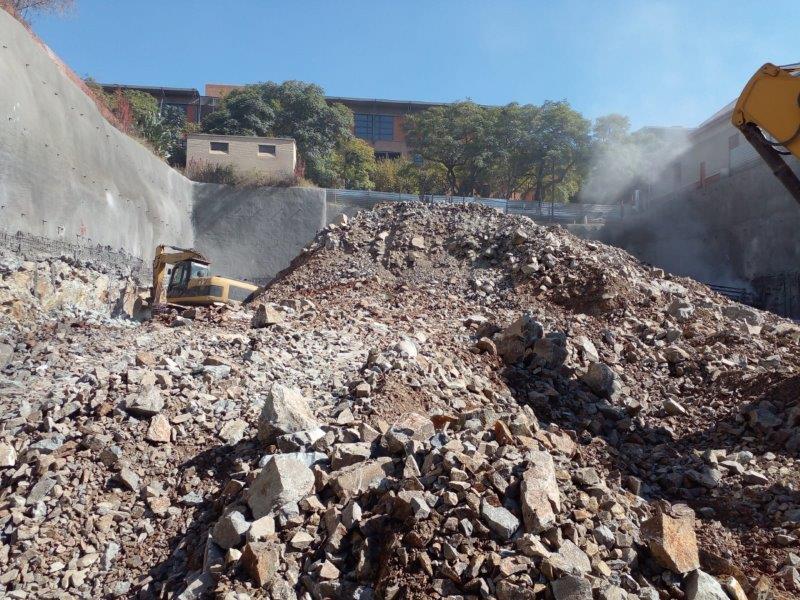 The bulk earthworks and lateral support work for the five level, 68 000 m2 super basement for the new Trevenna A-grade office complex in Tshwane has been completed successfully by Phoenecian Group. The Public Investment Corporation (PIC) is developing the project.

“It highlights our capability to undertake the largest super basement projects in South Africa. Building on our expertise as a demolition company, we have the flexibility to undertake any earthworks or lateral support requirements,” says Grant Luck, Contract Manager: Demolition and Earthworks Division.

Two 30 t excavators were deployed, feeding ten cube trucks each that loaded, hauled, and tipped material at a military base about 10 km away. Here the excavated soil and rock was used to build up berms at a shooting range, contributing to the environmental rating for the project. Additional equipment used for the earthworks included a bulldozer.

In terms of the lateral support, Phoenecian drilled holes at a predetermined depth to install anchors that were then grouted into position. The anchors supported a mesh wall sprayed with layers of gunite, a mixture of cement, sand, and water applied by a high-pressure hose. The guniting could not exceed 100 mm a day, with the thin layers applied to the mesh wall ultimately hardening into a concrete wall providing the necessary lateral support for the super basement.

A major challenge was relocating an existing stormwater pipe, which required laying a new 1-km-long pipeline. Another challenge was the rock formations encountered. “We had a lot of overbreak that required engineering input as to the designability of the rock face,” reports Luck. The fracture plane was also bigger than anticipated.

However, support from a strong professional team, combined with Phoenecian’s multidisciplinary approach, resulted in the successful completion of the project in mid-July. The company specialises in demolition, bulk earthworks, geotechnical services, bulk services, roadworks, civil and construction works and contract mining. It is the only company of its kind in South Africa to have three Grade 9 CIDB ratings, namely for SE (Special Engineering), CE (Civil Engineering), and GB (General Building).

“Building on our expertise as a demolition company, we have the flexibility to undertake any earthworks or lateral support requirements.” – Grant Luck, Contract Manager: Demolition and Earthworks Division, Phoenecian Group

The Trevenna super basement in Tshwane required 193 000m3 of excavation and 80 000 m3 of drilling and blasting. #PhoenecianGroup