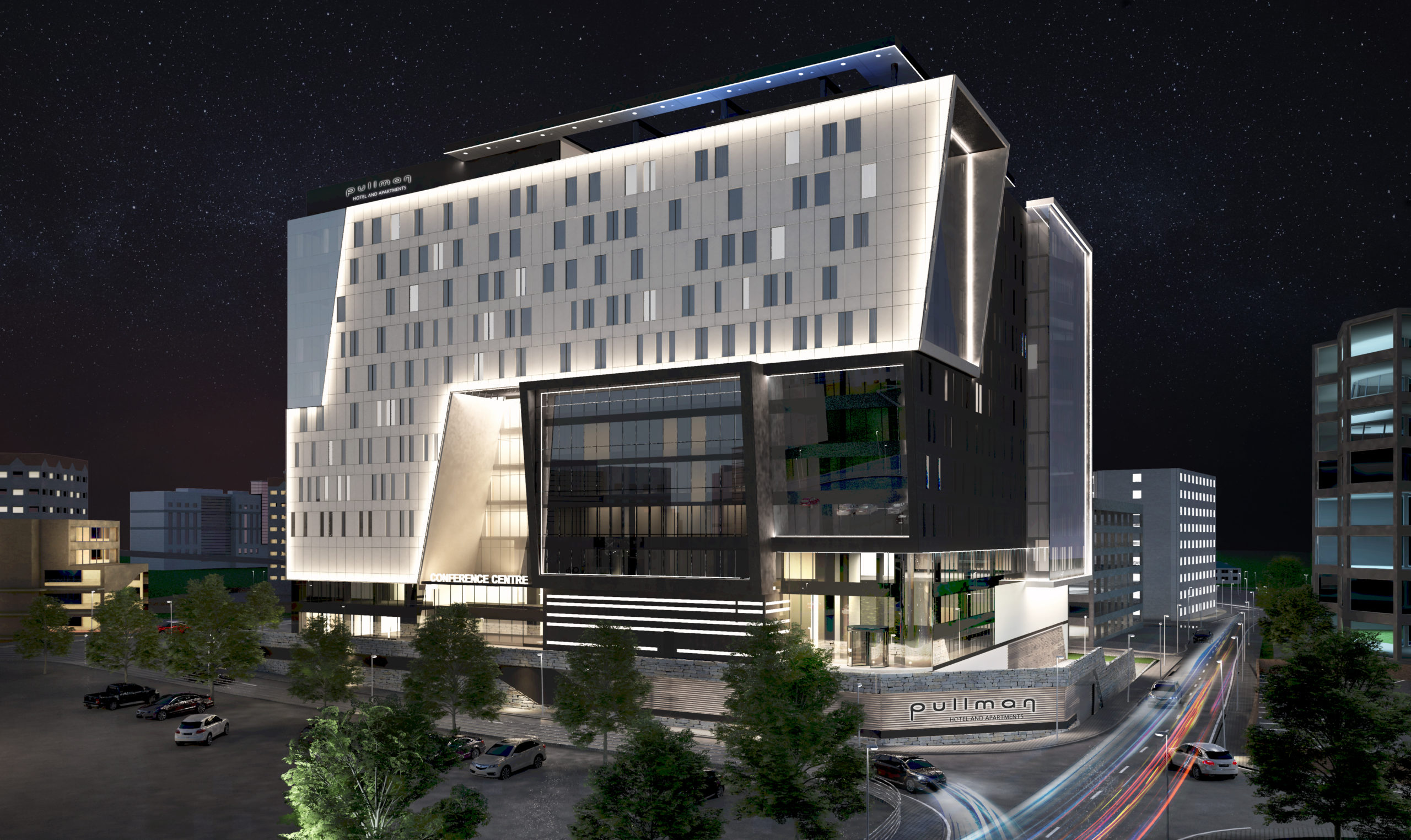 The 365-key Pullman Accra Airport City Hotel & Serviced Apartments in Accra, Ghana is the largest project designed by Paragon Architects and under construction at present. The 40 000 m2 development is substantial in the context of many African cities and the largest hospitality facility of its kind in Ghana.

Project Director and founding director of Johannesburg-based Paragon Group, Henning Rasmuss commented that it was an ambitious project.

The 13-storey above-ground structure consists of a 219-key business hotel and 149 units of branded serviced apartments, with basement parking for 211 vehicles. The hotel includes an elaborate and generous banquet hall for conferencing and events. The lifestyle offering is centred on an open garden terrace with façades that integrate artworks by local and international artists, mainly Ghanaian. This aspect is still under development.

Inter-Afrique Properties, the client, favoured a clearly sculptural, strong form and colour contrasts and a rooftop entertainment area with an infinity pool. This vision of an after-hours, urban, upmarket lifestyle deck was of paramount importance from the outset, notes Rasmuss. The client’s vision is predicated on its overarching objective to deliver a superior hospitality asset that responds to both current and future demands of the market in Accra. The client has also driven the interior design vision in conjunction with Shiralee Darley and the team from DIAD.

The project has been under construction since January 2019. Earthworks, excavations, foundations and basements have been completed, with the ground, mezzanine and podium floors anticipated to top out in August 2020. Paragon became involved with the project in 2013 upon its introduction to Inter-Afrique Properties by Grahame Lindop, a South African development manager.

Rasmuss explained that they have built this relationship by going through many iterations of the design on two different sites. He added that they have possibly undertaken an equal amount of development management and advice as they have architecture.

Initially, the brief was for a large single-phase mixed-use hotel and apartments building along with a small shopping galleria over two levels. This scheme was to be developed on an adjacent site at Airport City in Accra. However, in response to market dynamics, the project size and product mix have changed over time to achieve its final scope, under construction at present. The current brief and scope were bedded down in 2017, in close collaboration with Accor as an operator, following its appointment and the selection of the Pullman brand in 2014.

The client engaged Arup as the multi-disciplinary engineer in 2015. The Arup engineering practice and the Accor technical assistance team, in conjunction with Paragon Architects, then rationalised the structure around the specific Pullman room sizing. The team also worked with the interior designer to absorb and implement the brand standards for the hotel and serviced apartments. This translated into an intensive four-month collaboration in early 2018.

The main challenge from a technical viewpoint was the roads system in Airport City, which Rasmuss notes proved challenging for a project of this magnitude. In addition, the ground conditions in Accra required that seismic risk be considered, adding to the structural complexity.

Paragon collaborated with Robert Hayford and Kweku Hayford from rhayCAD Architects, its partner firm in Ghana since 2014, as part of the client’s requirement for local participation. Diagonal Projects, as project manager under Moses Honu, ensured that the Ghanaian and South African working cultures meshed seamlessly.

Crane Construction Consultants steered the project through the changing cost implications of the construction sector over the years with an even hand. The main contractor is MAN Enterprise, a Lebanon-based international contracting company with extensive hotel experience in West Africa, including Ghana. The range and number of sub-contracts is still growing as the project develops.

While Paragon has designed three other large mixed-use and hotel projects for the Inter-Afrique Group on various sites in Ghana over time, the Pullman Airport City project has been its key collaboration, led by Chairperson Dr. Kwame Nyantekyi-Owusu.

The technical side of the project has been ably driven by engineer Ernest Larmie and supported by Emmanuel Yartey, a project analyst at Inter-Afrique Properties, both key client representatives. The fact that the Inter-Afrique Properties’ team has been in place throughout the duration has benefited the end product in terms of embedded knowledge, continuity and better decision-making.

IBC Equity Partners, led by Anthony Siaw, has provided transaction advisory services to the client, ranging from contract negotiations with the professional team through to the negotiation of the Engineering, Procurement and Construction (EPC) contract and raising the capital for this landmark US$120 million project.

During the lifespan of this project, Paragon itself has designed and completed other smaller and less complex hotel projects in Africa.