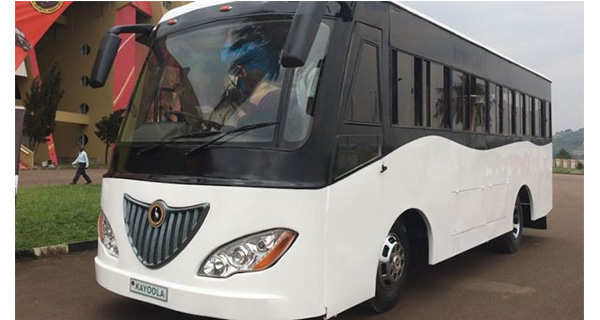 On The Road To A Green Future

In Uganda, a college project that led to ‘Africa’s first electric car’ is now an automobile start-up on course to mass-produce green vehicles for Africa.
Off Kampala’s chaotic arterial streets, we are on a dirt road with speed bumps that are large mounds of red earth. The red leads to a yellow building up a slope with awkward barbed wire fencing on its compound walls.
We are at Kiira Motors Corporation’s offices in Ntinda, in northeastern Kampala, home to what the company calls ‘Africa’s first electric car’ and ‘Africa’s first solar-powered bus’.
Outside the main building, a large white bus is parked under a makeshift shed. A scaled-down model of the same is placed under the stairway leading up to the offices. In the distance, a profusion of plantain trees; and a searing sun at 9:30AM.
The bumpy roads to Kiira are in a way akin to the journey ahead for this automobile start-up, ever since the green transportation initiative it kick-started in a little corner of Uganda.
“It’s an uphill task but we are working round-the-clock to deliver on our promises to our nation and the world,” says Allan Muhumuza, Vice-President, Marketing & Sales of Kiira, on the company’s mission to build eco-friendly mobility solutions for urban masses in a country of about 40 million.
It all started in 2007 as an extra-curricular activity by a group of students and teachers of the Department of Engineering and Mathematics led by Professor Sandy Stevens Tickodri-Togboa and Paul Isaac Musasizi, currently CEO of Kiira, at Uganda’s Makerere University.
Tickodri-Togboa was head of the department and, together with Musasizi, decided “the paradigm for training university students should be changed, as by the time they graduated, they didn’t have the skills for a working world”.
So they decided to start various extra-curricular projects for students after normal class hours.
Along the way, they were invited to be part of a Massachusetts Institute of Technology (MIT) initiative with the aim of designing and producing a five-passenger plug-in hybrid electric vehicle targeting the Indian market.
Makerere was “the only participant from Africa”, and as part of the project, eventually developed the two-seater Kiira EV, aptly the color green.
The financing came from the Presidential Initiative Fund for Science and Technology Innovations, and the electric car designed and built in Uganda for the first time was launched by President Yoweri Museveni in 2011.
“The original idea was to use the electric car in the Makerere University campus,” recalls Tickodri-Togboa.
In 2014, the team built Kiira EV SMACK, a sedan its makers say is ‘Africa’s first electric hybrid vehicle’; and thereafter in 2016, the 35-seater Kayoola Solar Bus, again ‘a first in Africa’.
“That we have talent in Uganda has been demonstrated with minimum resources… and we also have very good natural resources,” says Musasizi, the engineer-entrepreneur behind Kiira.
The government of Uganda, acting through the Uganda Investment Authority, has now allocated 100 acres of land for a vehicle assembly plant expected to open in Jinja, a town in the eastern region of Uganda, in 2018.
In contrast to the used expensive imported vehicles on Uganda’s roads, these will be factory-fresh vehicles made in Uganda.
Right now, Kiira has the three prototypes, and is looking at 305 units in the first year of production. These will mostly be pick-up trucks and buses.
The idea is to also convert the masses using public transport – mostly the ubiquitous matatus and boda bodas.
“We want to shift the market from 14-seater matatus to this. But most of all we want to reduce traffic and congestion. Our buses will be bigger to seat more people,” says Muhumuza, also an engineer.
“We realized that if we are to solve Africa’s traffic woes, the biggest need was to address public mass mobility, as that’s where the volumes and problems were. But also at the same time provide sustainable green solutions… Our emphasis was on the technology, to show that Africa can build solutions for Africa and these can be futuristic as well.”
At the time it was built, the solar bus cost an estimated $150,000 – it has solar panels on the top that powers lithium-ion batteries. If mass-produced, costs will come down.
“It’s a capital-intensive project and we are open to get tech and financing partners,” says Muhumuza, adding Kiira is in advanced talks with some technological partners.
“We are seeing a niche, a special place in public mobility in urban spaces that can be addressed by green buses,” says Musasizi.
East Africa’s automobile sector seems on track for more news. In neighboring Rwanda, there are reportedly plans to set up a Volkswagen manufacturing plant.
Outside the offices of Kiira, the prototype hybrid sedan is being ripped apart by men in blue overalls and being re-engineered. The car is a mere skeleton of its former self, but its journey on Uganda’s bustling streets, powered by an African sun, may just be about to begin.
Source: inspiredevolution