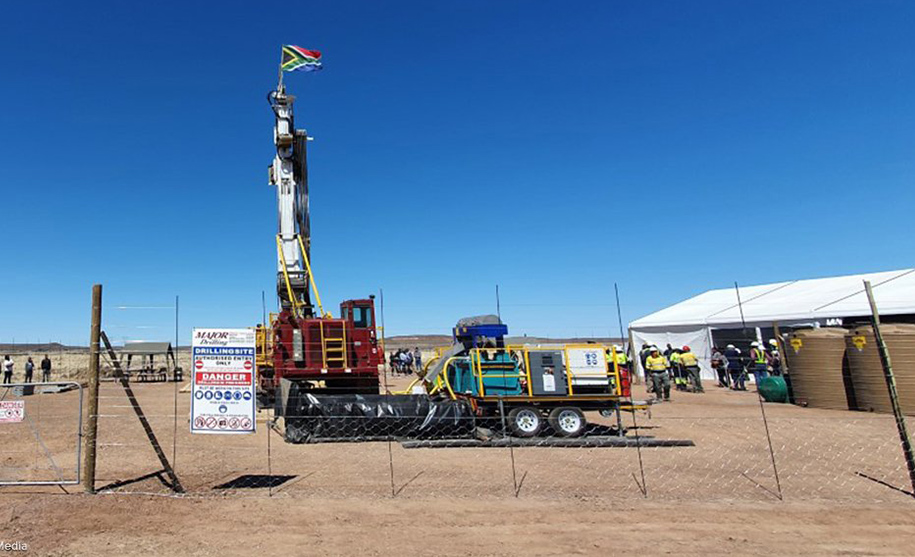 The KDD is a geoscientific research project in the Karoo Basin by the CGS to conduct investigations aimed at developing a geo-environmental baseline model. The research’s special focus is aimed at assessing the potential environmental impacts that could be brought about by the shale gas development in the Karoo.

This launch comes at the back of very successful consultations with the communities in Beaufort West and extensive research conducted by the CGS during phase one. Speaking at the launch, CEO of CGS Mr Mosa Mabuza noted with gratitude the progress and consensus reached through these consultations, “I am proud to announce that today, the government through the CGS and the Karoo Deep Drilling Project enjoy generous support and cooperation from the leadership of the Central Karoo District and the Beaufort West Local municipalities, the local political leadership and the community at large. That is what makes this momentous launch something that we all can be proud of and look forward to it yielding the positive and beneficial outcomes for all.”

The KDD – announced in 2016 and mandated by the Department of Minerals Resources and Energy (DMRE) with the aim to provide scientific evidence to inform policy development and regulatory framework on shale gas exploration and extraction – is seen as a possible game changer for the Karoo region and the South African economy. This outlook is based on the projected potential to explore and extract shale gas, and also provide an opportunity for the country to begin exploring the production of its own fuel. The United States Energy Information Administration estimates that South Africa has the eighth-largest shale gas reserves in the world at 485-trillion cubic feet.

Akin to the Chinese proverb, ‘We do not inherit the earth from our ancestors, we borrow it from our children,’ – the CGS recognises shale gas as a possible game changer for the Karoo region, in particular to benefit the residents of Beaufort West and the South African economy. In this regard, the CGS with the support of all stakeholders is proceeding with phase two.

Through this research project, the CGS will establish a geo-environmental baseline, put in place environmental monitoring mechanisms and support the state with the formulation and implementation of evidence based regulatory framework for shale gas development in South Africa. The activities in phase two are expected to last for the next 10-12 months including the drilling of an ultra-deep borehole down to 3500m.

Although the announcement was met with some resistance from a number of communities and non-governmental organisations in the Karoo, significant research and extensive consultations with these community representatives have led to the progress of this project which has already proven beneficial in the early stages. The drilling of the deep borehole commences today and the Beaufort West Local Municipality, on behalf of its community has given the project a thumbs up.

The Beaufort West Local Municipality Mayor, Councillor Noël Constable said, “We have taken the time and effort to engage with all affected sectors of our community, and we are comfortable in the assurances by the CGS that this project provides promise and potential for shale gas development in the Karoo region. The most important factor for us is the safety and preservation of land as well as the upliftment of our communities in Beaufort West.”

The initial drilling stages of the project have already proven beneficial to the community. During the KDD Project’s first stage of the drilling phase – five 169m deep shallow observation wells – in November 2017, two of them have the capacity to yield significant amounts of good groundwater of up to 33 million litres a month. This discovery coincided with the unprecedented drought conditions in the Western Cape area, particularly Beaufort West, which led to a decision to donate the two boreholes to the municipality to alleviate this humanitarian crisis. The official hand-over of the boreholes took place on 13 February 2018, and to date – the municipality has pumped and distributed 397 million litres to the people of Beaufort West. The municipality continues to pump sustainably from the two boreholes.

“This initiative will continue throughout the project lifecycle so that the people of Beaufort West feel part of the project. As such, feedback sessions will be conducted on a regular basis to keep the stakeholders abreast of all developments,” concluded Mr Mabuza.