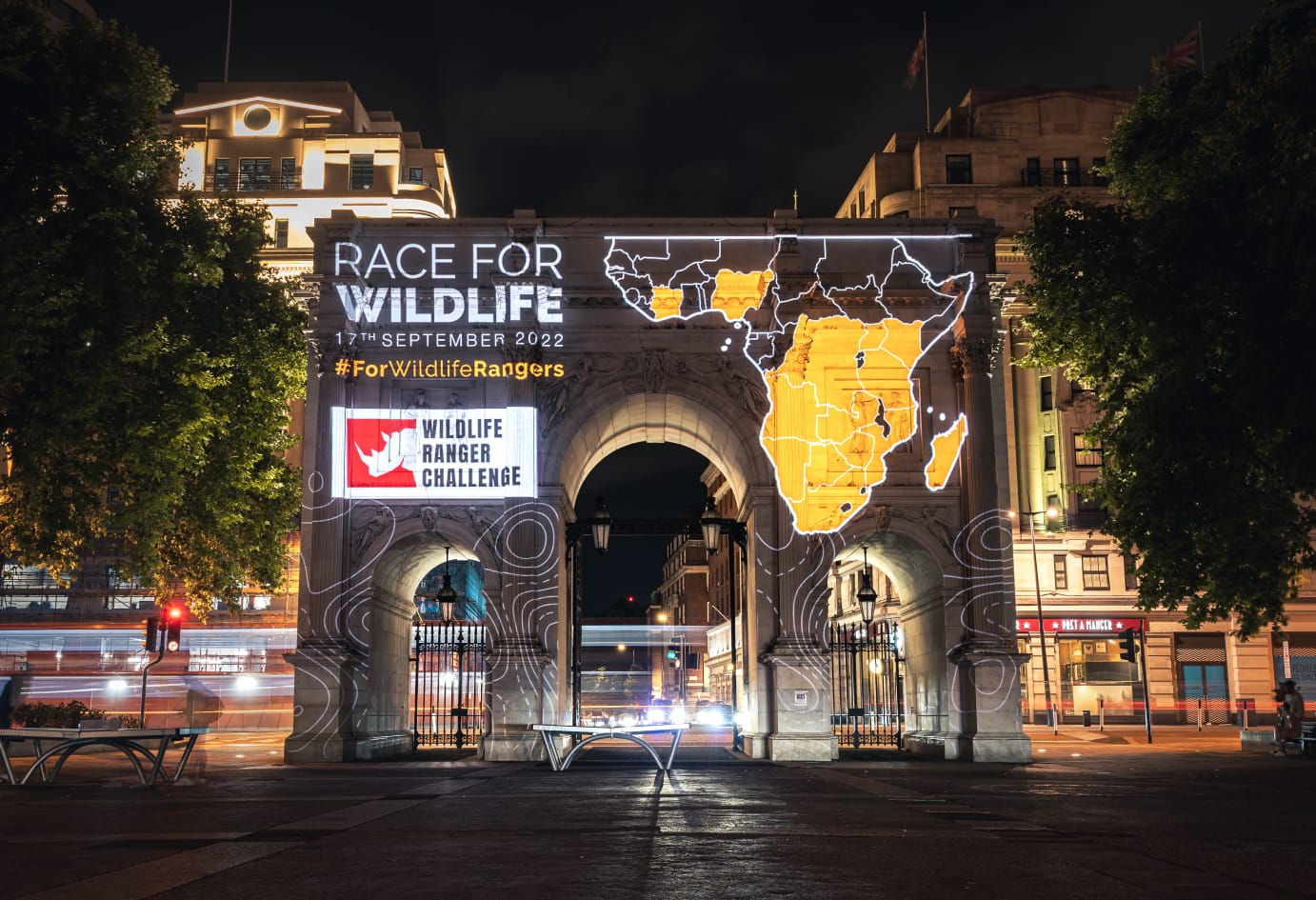 Ahead of World Ranger Day on 31 July, Tusk lit up iconic London landmarks in a spectacular light display to celebrate the launch of the Wildlife Ranger Challenge 2022.

Across the capital, major locations such as the Science Museum, Marble Arch and the South Africa High Commission in the heart of Trafalgar Square glowed on Tuesday night, as a map of Africa was projected across these iconic buildings that resonate with the mission and values of the Wildlife Ranger Challenge.

The map showcased the incredible number of countries represented in the Challenge, which will see over 100 ranger teams from 15 African countries participate in a multi-million-dollar fundraising initiative in aid of the men and women working across Africa’s protected areas.

Organisers, Tusk and its partners, the Game Rangers’ Association of Africa and NATURAL STATE, intend to bring together delegates to take part in the Challenge, which will culminate in a 21km half marathon where they intend to set a new Guinness World Record for the fastest half marathon carrying 22kg. This will coincide with the African Ranger Congress taking place on Saturday, 17 September in Kasane, Botswana.

The Challenge will spotlight the ever-diversifying role of rangers to demonstrate their broad responsibilities as conservationists, teachers, community support workers and leaders, contributing not just to their immediate communities but to global UN Sustainable Development Goals.

“As rangers, we’re doing more than ever to protect Africa’s wildlife, despite the funding challenges created by COVID-19. To ensure we can continue to safeguard the natural world, we need greater support as we not only rebuild post-pandemic, but develop and expand our impact,” says Benson Kanyembo, Law Enforcement Adviser for Conservation South Luangwa (Zambia).

The Wildlife Ranger Challenge has, since inception, raised a total of more than $12 million. This year, Mark Scheinberg and the Scheinberg Relief Fund, the Challenge’s founding donor, has generously committed $1 million in match-funding in support of rangers, on top of the total $6.5 million to the campaign to date.

Bear Grylls, Adventurer and Tusk Ambassador, says: “Today, wildlife rangers face mounting pressures. Resources are incredibly stretched, with many working on the front line of Africa’s protected areas lacking the essential tools to carry out their work safely. With poaching rates on the rise, the demands on rangers will only become greater. Taking part in the Wildlife Ranger Challenge is a fantastic way to show you’re for wildlife rangers and ensures these conservation heroes receive the recognition and vital funds they so critically need.”

This year, the Wildlife Ranger Challenge 2022 aims to impact more than just funding. It seeks to correct misconceptions of the role of rangers, support the recognition and development of the entire ‘rangering’ profession, and improve welfare of field rangers across Africa, all while building camaraderie amongst rangers.

A survey conducted by Tusk at the recent Tusk Conservation Symposium found that the top five threats to conservation over the next ten years include habitat loss, human-wildlife conflict and climate change. The skills needed to meet these challenges are indicative of the changing role of wildlife rangers. Yet, despite the multifaceted nature of the job, rangers are often misunderstood as just a man with a gun chasing poachers.

“In the past, women would be overlooked for this job because we did not fit the traditional conception of a wildlife ranger. However, over time, we have proven women play a vital role in protecting Africa’s rich natural heritage. From deterring poachers out in the field, to teaching the value of conservation among local communities, we tackle habitat and biodiversity loss from every angle, leaving no stone unturned,” says Sergeant Belinda Mzimba, member of the Black Mambas Anti-Poaching Unit (South Africa).

“The London lights was just the start of the celebrations for the Wildlife Ranger Challenge 2022. To date, we have supported over 2,000 rangers across 24 African countries, and looking ahead, we have even greater ambitions. Our hope is that the Challenge will become not only the largest pan-African sporting event, but a springboard from which the entire ‘rangering’ profession can be recognised and developed,” says Charlie Mayhew MBE, Chief Executive of Tusk.

The 2022 Challenge will be accompanied by a series of mental and physical challenges, with the public encouraged to participate alongside the rangers. A mini-challenge for ranger teams with canine units, in which dogs and handlers will demonstrate their tracking skills, is a new exciting feature this year. Find out more, donate to the cause and sign up to run in solidarity with Africa’s rangers at wildliferangerchallenge.org.